A big fan of Twin Peaks, I’ve been collecting anything and everything associated with the television show and film for 26 years. I’ve got some cool stuff and some weird stuff (and some one-of-a kind stuff).

Twin Peaks generated only a few pieces of official merchandise (books, T-shirts, cards, etc.), most of which were relatively easy to get, back in the day. Still, there were some goodies out there, beyond the official products.  These items were often unique, and fun, and worth having.

Twin Peaks was big hit outside of the U.S. and many overseas tie-in items were amusing and well-designed (check this one out). Promotional materials (press-kits, posters, free merchandise) from both here and abroad were rarer to come by and quite desirable (these pieces have always been highly-prized by me.) Finally, there were those very rare items such as props and cast gifts, which were extremely tough to find.  A lot of these items have been listed and discussed on Dugpa.com forums.  Check them out here.

As a collector, one of the most exciting aspects of the new Showtime Twin Peaks series is the prospect of new merchandise.  I’m sure we’ll get a new soundtrack and assorted books and calendars and such.  But how far will they go this time?  Will David Lynch approve things such as action figures, a common item for almost every series nowadays (I mean, if they can make Breaking Bad figures, surely they can make Twin Peaks figures.) Will there be Funko Pop figures? Card games?  Comic books?

All of this is possible and some of it is probable.  Although I strongly believe David Lynch will not want to dilute the brand, or diminish the magic of Twin Peaks by simply making it a commodity. (Lynch reportedly did not approve the 1992 Twin Peaks calendar, and it’s hard to imagine he will endorse something like a silly bobble-head figure.) Still, I’m certain some interesting treats are on the horizon.

To celebrate collecting Twin Peaks, I’m posting pictures of some of the cool and unusual items I have in my collection. 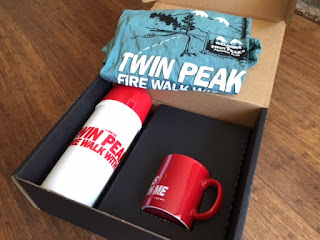 The box was shipped by New Line cinema to video wholesale distributors who used them as incentives: video stores that ordered a certain number of Fire Walk With Me videotapes could get one of these special boxes. 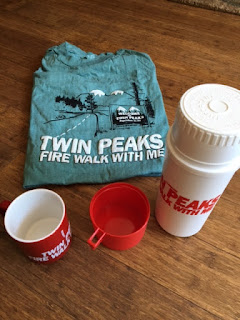 The mug is quite handsome: it is shiny bright red and displays the FWWM logo. 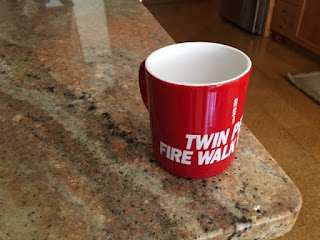 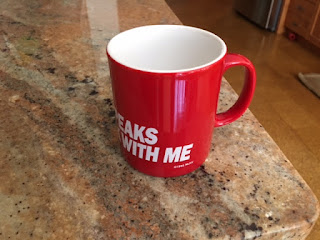 The thermos is rather disappointing: it simple lightweight plastic container. 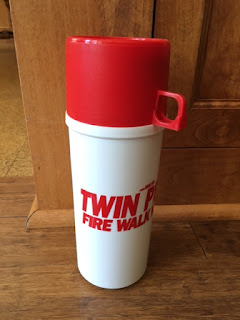 The T-shirt is the most unusual item as it was “pine-scented.” (I should say, 25 years later, the pine scent is barely noticeable.) All the white areas on the shirt are embossed with a puffy, soft texture. 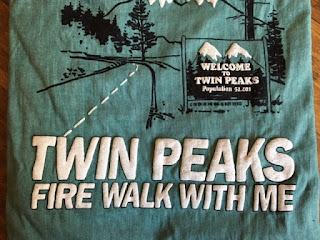 I don't know how many promotional boxes were made, or how many survived intact to make it into the hands of collectors.  I haven't seen one for sale on eBay in quite awhile. Fifteen years ago, a few sold online for about $100. I don't what, if any value, these boxes would have today.

BONUS: Fire Walk With Me matchbook.


This is a cool piece.  I don’t know where I got it, but I always thought it was the perfect promotional item for Fire Walk With Me. 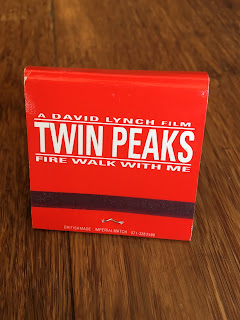 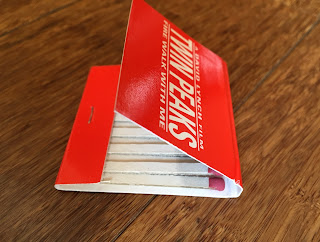 Hope you like these photos!  More to come!
Posted by John at 8:30 AM