Wrapped In Plastic at 25: Letters

Over the years we received lots of letters at Wrapped In Plastic. In the pre-internet days, the letters page in WIP was a forum for many fans to connect with one another. Most fans wrote to share interesting theories about Twin Peaks. Others took us to task over one topic or another. (The dream theory in Wrapped In Plastic #60 probably garnered the most mail. Some readers were quite upset that we suggested an alternative take on their favorite film. Others were open to the idea and relished debating the new interpretation.)

We got letters from many different countries. I can remember getting some from South Africa, Israel, Australia. It was exciting to realize we were reaching Twin Peaks fans all over the world!

Here’s a sample of some fun or interesting letters from Wrapped In Plastic. This is but a tiny portion; there are probably enough letters in the 75 issues of WIP to make a book!

WIP 6 (Aug 1993): Some interesting theories and predictions from decades ago.

Dear Wrapped in Plastic,
I hope any future films of Twin Peaks will be done for television.  If the networks don't want it, then have it in syndication.  FWWM could have been done for television just as well, maybe better.  Twin Peaks was born on television; it should stay on television so everyone can see it at the same time and then start analyzing the tape.  That's the way it should be.  It would be nice if it could come back as a weekly series, even if some parts have to be replaced.  I would love to see that third season.

Dear Craig and John,
I just received WIP, and after reading it I felt like seeing FWWM again.  I must say that upon second viewing it appeared to be a stronger film than I had remembered.  Do you have any thoughts on the significance that clocks and time played in the film?  Toward the beginning of the film, Chet Desmond, speaking to Sheriff Cable, said, "We keep our own clock."  Shortly after this, the first of many shots of various clocks is shown.  Clocks appear throughout the film and Desmond plays a little joke on Stanley by asking him what time it is.  And on Laura's last day we see the shot of the clock that runs out of control while accompanied by the song, "Moving Through Time."  I pondered the role that time may have played in the film, but I couldn't come up with any strong theories.  Any thoughts?

Here's a fun letter from an enthusiastic Twin Peaks fan. I wonder what he is doing today?

Dear WIP,
I need to clarify this thing about a monkey in FWWM.  Throughout the Twin Peaks series and movie, one point has always come up:  "The owls are not what they seem."  The owls!  It's not a monkey, but an owl close up and eating creamed corn.  The owls are BOB and his followers.  Look under your nose, and you will see that I am right.  The owls have been watching Laura, Cooper, and all the other characters throughout the series, books, and movie.

I hope the WIP team sees what I see, because I don't want to hear about monkeys any more.  They're owls!

Sheriff Truman said to Cooper in episode three that there is some kind of darkness in the woods, and that they take many forms (as spirits and owls).  Hope you get the message!

Occasionally we received a special letter. This was one from Catherine Coulson, shortly after we interviewed her for WIP 5: 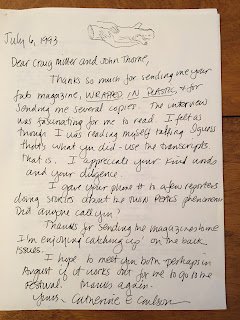 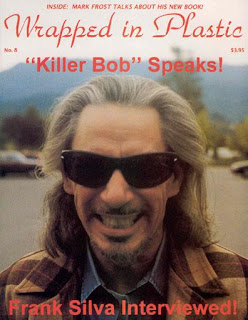 Craig and John,
Just read WIP 8.  First let's start with the cover.  WIP cannot be accused of predictable "formula" when it comes to magazine covers.  That is without a doubt the most tacky, unflattering photo of Frank Silva I have seen.  Thought you'd like some feedback.  Nice illustration of Bob on page 1, though.

Your complaints about The X-Files being "notorious for sucker-punching the viewer with unfinished stories and dangling subplots" puzzled me.  These are a bad thing in XF, but they are okay in Twin Peaks?  Let's face it, TP has a lot of unfinished stories and dangling subplots, and I have yet to see you criticize it for this in the same harshness and consistency that you do for XF.  Instead you praise TP and declare it one of the greatest series ever.
TP's producers and writers had opportunities to wrap up all of the stories.  They had to know their show was in danger of being cancelled, and they could have resolved everything, but they didn't.  Then a movie was made.  They could have wrapped up everything in that, but they didn't.  You watch XF and declare that "Mulder's fate [from the second season finale] must be shown."  What about Twin Peaks and Cooper's?

I like this one. Some good comments about electricity and then a mention of the picture of the nuclear explosion on Henry's wall in Eraserhead: 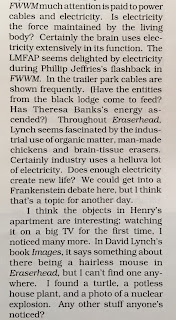 Ten years ago I was finishing the first year of teacher training in a small New England college.  The spring of that year, there was a buzz going through my dormitory about a new television series called Twin Peaks.  Between work and study and a general disinterest in television, I never watched the first episodes.  That was until the night I walked into the lounge from the campus library at the very end of the first season finale.  I entered just as Cooper opened the door to his room.  I saw the gun barrel at the same time he did and felt those same three shots to the stomach.  As the screen went black and his body hit the floor, I remember being paralyzed, completely transfixed and unmoved, and all I could say was, "What is this?" over the awed shouts and screams of disappointment the small legion of watchers in my dormitory were experiencing.  "It's Twin Peaks, man!" the resident assistant told me.  And right at that moment, on that very spot, in what can only be compared to a religious experience (I'm sure many fans know the feeling all too well), I was hooked. Ten years later, as a teacher in a Tibetan refugee settlement in Northern India, I still have a serious disinterest in television, but am as in awe of Twin Peaks as I was in those last thirty seconds of the first season finale.  Experiencing Tibetan Buddhism here on a day-to-day basis, my mind reels at the similarities to Cooper and the series.  I hope this will be an angle pursued sometime within these very pages.  For now, I remain honored to have caught Twin Peaks ten years ago, like a comet hurtling through space for a brief instant, or ducks on a pond, or a wonderfully strange dream.

WIP,
February marked Laura Palmer's sad anniversary.  Who really is Laura Palmer?  Everything or nothing, the essence of mystery and transcendentalism. The people of the town are broken-hearted and yet their lives go on, as if Laura somehow reincarnated in all of them.  Now that I think about it, Laura never really dies but always resurfaces in Donna or Madeleine Ferguson, for example.  When Donna visits James in jail there certainly is something very different about her, the attitude especially.  Also, notice how Nadine all undergoes a major change as if she were in high school.
Unfortunately, like all martyrs, Laura has to die in order to be reborn.  She died in the body which caused her anguish and pain only to seek redemption.  Who can forget the triumphant smile and tears when Cooper, also a sacrificial lamb of sorts, is sitting with her in the waiting room, opening the door to paradise?  Cooper and Laura's fate have been sealed, not in this world but in another time dimension.  Cooper sees her in his dream, in Glastonbury Grove and finally in the end.  The mystery will never be fully solved.  Lynch's spectacular scenarios (I don't see why critics dissed Fire Walk With Me) are picture perfect.  The many Laura's coincide with our own multiplicity, the shivic cosmic dance of death and rebirth.

Dear WIP,
Wonderful, thought-provoking article on Twin Peaks's final episode.  As a pianist/composer, I have been fascinated for many years by sacred and secular hand gestures throughout the world.  Whether intended or not by Mr. Lynch, Laura Palmer's hand gesture in the Red Room is identical with a common "mudra," or symbolic hand gesture, found in Buddhist sculpture called "semui-in" (in Japanese), "shih-wu-wei-yin" (in Chinese), and "abhayamudra" or "abhayamdadamudra" (in Sanskrit).  It is used in meditations to create the absence of fear and is similar to the teaching mudra, "an-i-in" except that Laura’s left hand would have to be turned outward and somewhat down.

This one never saw print. This guy really didn't like that we were charging money for back issues: 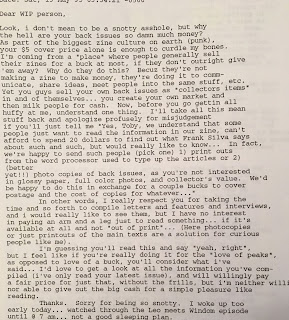 WIP 61 (October 2002): Just one of the many, many letters about the dream theory essay. Some readers liked, others didn't. That's the way it goes. (Still, one prominent film critic who had been a big influence on my writing wrote and praised the essay. I felt like I had written something substantive and worthwhile. It was a good feeling.)

Craig and John,
Just recently finished your article about FWWM's Deer Meadow prologue.  Your theory that it's all Cooper's dream is quite brilliant, holds together well, and should make lots of your readers very happy.  But....

I reject it.  I reject it because I don't feel any need for it.  The first thirty minutes of Fire Walk With Me are probably my favorite half hour in any film, and accepting your take on it would honestly spoil the magic for me.  Taken as "reality," I find the prologue to be mysterious, incredibly intriguing, and a whole lot of fun.  I actively enjoy trying to piece together all my little theories about how the supernatural elements "work."   After finishing your essay, I sat and thought about the prologue as a dream, and the whole film suddenly seemed less interesting to me.  It felt like a cop out.  So my own search for answers will continue.

That's it for now. There's more WIP 25th Anniversary celebration to come. Stay tuned.
Posted by John at 9:41 AM