Wrapped In Plastic at 25: Beginnings

October 2017 marks the 25th anniversary of Wrapped In Plastic magazine.  Issue 1 went on sale in comic stores across the country on October 14, 1992. Over the next 13 years, Craig Miller and I published 75 issues of WIP. By the end of the run we calculated we had printed roughly one million words about Twin Peaks, David Lynch, Mark Frost and other associated films, TV shows and artists.


This month I’m walking down memory lane, publishing a few short blog entries about WIP. There’s nothing weighty here. Nothing that will mean much to others. But indulge me, if you will. This is my online scrapbook and I’m going to reminisce about Wrapped in Plastic and celebrate a few of my favorite moments.

I’ve told the story before about how Craig Miller approached me at a Dallas comic convention in 1991. He said, “Let’s make a Twin Peaks magazine!” and I said, “Yes! Let’s do it.”

It would take us over a year to actually make it happen, but in 1991 I was so gung-ho after meeting Craig that I sat down to make a list of possible magazine titles. Wrapped In Plastic was always my favorite (it was a phrase recognizable to Twin Peaks fans but also a title that might evoke curiosity in the casual magazine buyer, anything to get a potential customer to take a look.) I think my second choice would have been, Wow Bob Wow.

After a year of on-and-off-again plans (we tried to get a license to use Twin Peaks in the title but the cost was too prohibitive) Craig and I started work on issue 1 in the summer of 1992. Around that time, I had been lucky enough to win a private screening of Fire Walk With Me (long story) and that was a real motivator to get the first issue into production.


We wrote a review of Fire Walk With Me. It was an embarrassingly amateurish review but that’s how you get started, just jump right in. We’d get better at analyzing the film as we returned to it “time and time again” over the next decade (in issues 34, 60 and 71, in particular).

Issue one was fun but it really was a “fanzine.” We were only starting to find our way.

We published a calendar that displayed plot events from the film and series. It was a fun, fannish exercise, but people liked it: 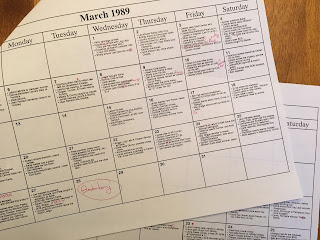 I had tried putting together a flowchart that showed the narrative structure of the show (which events led to the next, etc.). But it was too unwieldy and it fell apart as I went along. It was one of the many abandoned ideas for the magazine: 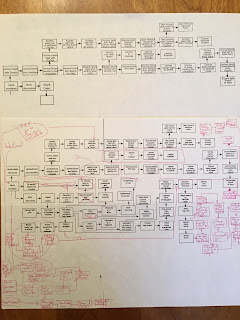 We were happy with issue one. We printed up advertisements about it to distribute at comic conventions. It was the best way to spread the word in the pre-internet days. We started work right away on issue 2, which was a much better issue. And then we started to receive letters, LOTS of letters. I’ll talk about some of those in a future post. 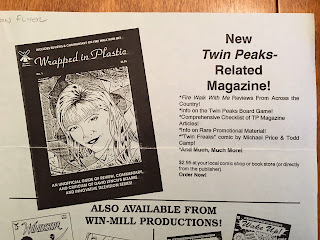