Welcome to The Obscure Twin Peaks!  Joel Bocko was reading my new book and wanted to know more about the Florence Gould Seminar that is mentioned in the text once or twice.  Here’s a report about that event, which took place just one week after the airing of episode 14 (where Leland was revealed to be Bob).

On November 17, 1990, Florence Gould Hall in uptown Manhattan hosted a fascinating seminar entitled "Return to Twin Peaks." This was a moderated discussion featuring a number of Twin Peaks personalities.
The seminar was advertised in an issue of Soap Opera Weekly (probably sometime in late September/early October of 1990).  The advertisement was small and the seminar quickly sold out. (The venue only accommodated about 400-500 people.)
On the stage, in the auditorium, stood four round tables with chairs, red table cloths, and candles.  The dim lighting, candles and Twin Peaks music playing over the loudspeakers provided an otherworldly ambiance to the room.
A group of people emerged from behind the stage curtain and took their places at the four round tables.  (Who these people were, and why they were there, was never explained. They were likely VIPs, lucky enough to share the stage with the Twin Peaks guests.)  An announcer introduced Mimi Torchin, editor of Soap Opera Weekly and an avid Twin Peaks fan, who would be the moderator for the upcoming panel.  She spoke briefly about the phenomena of Twin Peaks and then introduced Mark Frost, Jennifer Lynch, Dana Ashbrook, Wendy Robie, James Patrick Kelly, and Catherine Coul­son.
Ms. Torchin provided most of the discussion topics and asked a majority of the questions.  Many of these questions were di­rected to Mark Frost and Jennifer Lynch.  Both talked about David Lynch, with Frost noting that he and David drank a lot of coffee as they wrote Twin Peaks. 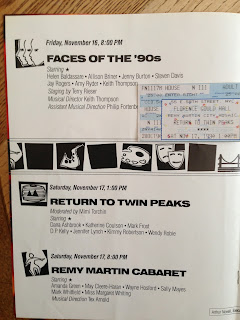 A week earlier, the show had revealed that Leland, possessed by Bob, had killed Laura Palmer.  Ms. Torchin took a poll of the audience to see how many people had guessed the identity of the killer.  Over half the attendees raised their hands.  Mr. Frost provided a few details about the Bob plot, explaining that Leland did not know he was possessed.  He promised that more details about the relationship--and Laura's knowledge of it--would be revealed in the next few episodes.

Jennifer Lynch spoke quite a bit about her book, The Secret Diary of Laura Palmer.  She talked about the basis for the his­tory of Laura's life before she died and explained how she came up with some of the material in the diary.   Much of it, she said, came from consultations with her father and other writers from the show.  She also visited shopping malls to observe tee­nage girls.  When asked about home life with her father, Ms. Lynch told a funny story of how David once constructed a minia­ture volcano on the dining room table.  For weeks, the family had to eat around this model volcano.
Dana Ashbrook (who nervously shifted in his chair throughout the seminar) spoke of his early acting career and noted that his older sister was also an actress.  Ashbrook thought it was funny that his character, Bobby Briggs, was supposed to be a punk and a jock combined.
Wendy Robie, whose character Nadine believed she was 18 years old, said she hoped one day Nadine would notice the eye patch she wore and try to figure out what had happened to her.  Upon hearing this, Mark Frost smiled and pretended to make a special note in a pocket notebook.  Ms. Robie also revealed that the many figurines adorning the shelves of the Hurley house on the show were all disfigured or handicapped in some way (a one- legged dancer, a woman with an eye patch, etc.).
Catherine Coulson, after apologizing for not bringing the Log Lady's log with her, spoke of her long-time working relation­ship with David Lynch.  She recounted the now famous story of how Lynch, when working with Coulson on Eraserhead, said that he would someday cast her as a lady with a log in a television show called "I'll Test My Log With Every Branch of Knowledge."  She spoke more about her interpretation of the Log Lady, but was careful not to give too much away regarding the mysteriousness of the character.
David Patrick Kelly spoke briefly about his character, Jerry Horne, and Jerry's relationship with Benjamin Horne, but had little else to say.
As the seminar drew to a close, Ms. Torchin took questions from the audience.  Many people were eager for answers to puz­zling loose ends in the story and directed their questions to Mark Frost, but he revealed very little.  When asked why Sarah Palmer saw a horse the night of Madeleine's death, however, Frost explained that the white horse signified death.  Other particip­ants quizzed Frost on some of the show's possible errors, but did not receive any enlightening answers. (Frost was at a loss, for example, when asked about the discrepancy regarding Jacques Renault’s blood type changing between seasons one and two.)
After only a very few questions from the audience, Ms. Torchin thanked the panel of guests for attending, and the semi­nar was over.


(This is an edited and revised version of an article by Lorna Thorne that first appeared in Wrapped In Plastic #6.)

Get more interesting facts and history about Twin Peaks in The Essential Wrapped In Plastic!