I don't have much original comic art.  I do have a few cherished pieces, however, that are rather unique.  After writing about my Art Spiegelman sketch, I decided to open my own online gallery at the website, Comic Art Fans (http://www.comicartfans.com/).  I posted a few pieces from my collection and one in particular got a lot of attention.  It was my X-Men page by John Byrne.  Here it is: 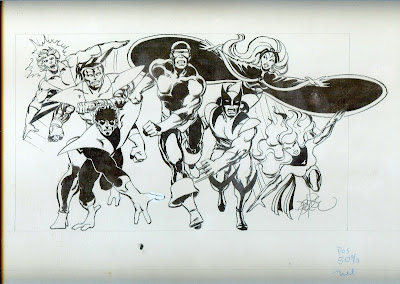 This piece was done for promotional purposes by Marvel Comics back in 1977.  It saw publication in at least one comic:  Avengers 165 (Nov, 1977).  John Byrne started as artist on X-Men 108 in December, 1977, one month after the Avengers title went on sale.  This makes my drawing one of Byrne's earliest official X-Men pieces.  It also makes it valuable.  I've already had a few people inquire about buying the drawing (and they made some very nice offers).  Apparently, an original piece like this is highly sought after.

Byrne's drawing is bold and dynamic and it's a great portrait of the entire team. The X-Men are in action and ready for battle!  Cyclops, a strong central figure, leads the charge.  Three X-Men flank him on each side.  The piece features Banshee (upper left) who left the team shortly after Byrne joined the title.  It also prominently features Phoenix (bottom right) and Wolverine in his original costume.  The composition is notable:  Phoenix and Banshee balance the two corners, while Storm's black cape balances Nightcrawler's dark costume.  Her cape also isolates and highlights the commanding presence of Cyclops.

This is a finished piece of art but it contains some obvious blemishes: There is a splotch of white-out on Nightcrawler's thumb, a place where Byrne obviously made a fix to the figure.  There is also a smudge of ink just below Nightcrawler's hand.  Finally, there is a cryptic note on the bottom right, written in blue pencil: "Pos 50%" along with a scribble that may be someone's initials or sign-off.  (This is probably a note to the colorist or someone else involved with the printing of the piece.)

I bought the drawing from John Byrne in New York City at a comic convention in November, 1981.  He had recently left X-Men to start work on The Fantastic Four.  Byrne was doing sketches.  He was charging $20 per figure and he had a bold, hand-written sign in front of him that read: "No X-Men."  I really wanted a sketch but none of the Fantastic Four (by themselves) seemed that interesting.  When I got my chance I requested a Dr. Doom sketch, which Byrne happily produced.  As he was packing up to leave he pulled out a few pieces from his portfolio and asked for offers.  One was a nice inked drawing of Kitty Pryde.  He held it up but nobody in the packed crowd said anything.  He put the drawing away and pulled out the X-Men drawing.  Again, nobody offered any money.  Everybody seemed afraid.  Who could guess what he would want for such a piece?  Byrne looked around and shrugged.  He seemed kind of frustrated.  Just as he was slipping it back in his bag, I yelled out, "Forty dollars!"  He pulled it right back out and said, "Forty dollars. That sounds good."  I handed him the money and he handed me the art.  I figured I got a great deal -- seven characters, and all of them X-Men!  Had he been doing X-Men sketches (and he emphatically wasn't) it would have cost me $140 to get an equivalent drawing.

I brought the art home and had it framed.  It has hung on various walls in various homes for the past 28 years.  Even though I lost my interest in the X-Men comic long ago, I still have a strong attachment to my original John Byrne X-Men drawing.  And I'll tell you, it was the best investment of forty dollars I've ever made.
Posted by John at 10:43 AM