There’s a whole lot to like in All-Star Superman. Writer Grant Morrison essentially distills decades of Superman lore into a 12-part series (collected here in two volumes). The story begins as Superman exposes himself to a lethal dose of solar radiation and soon realizes he has only a short time to live. He decides to tie-up various loose ends in his life: We see a dramatic confession to Lois Lane, a visit to (and from) the Bizarro world, multiple encounters with Lex Luthor, a reminiscence in Smallville, and various other story bits from the Super-universe. Morrison doesn’t cheat with his “Superman is dying story” either; he provides an elegant and moving resolution that is quite effective. There are many great moments in the series—some large and super-heroic, others small and tender—all exquisitely rendered by artist Frank Quitley and colorist/inker Jamie Grant. This is a beautiful comic to read and to look at.
All-Star Superman is a self-contained tale with a satisfying over-all arc. But there is a fractured nature to Morrison’s writing style that can be disorienting. Morrison deliberately elides in his telling—skipping over or leaving out crucial parts of the plot, assuming readers will fill in the blanks. I read All-Star Superman pretty fast and will admit to getting tripped up by the story in a few places. Clearly a closer read (or re-read) is required to get everything out of the book.
All quibbles aside, Morrison has written what is probably the best Superman story ever. And his greatest accomplishment here is that he finds a perfect balance between the alien and human qualities of the character. Let’s face it: Superman’s “super-ness” can, at times, make him distant and affectless. After all, how does one relate to a character who is essentially a god? Through the impending death scenario and elegiac tone to the story, Morrison has found a way. He succeeds at making Superman sympathetic and relevant while still maintaining an alien aspect to the character. (In the end, despite all his trials and sacrifices, we never fully know who or what Superman is.) In All-Star Superman, Grant Morrison restores mystery and possibility to one of the best known characters in comics. That’s no easy feat. In fact, it sounds like job for . . . (well, you get it).

The Walking Dead, Volume 1: “Days Gone By” – Robert Kirkman & Tony Moore
I heard good things about this comic so I thought I’d give it a try. Alas, despite its zombie premise, the story was lacking. Writer Kirkman chooses to focus on his characters and their responses to disaster and tragedy rather than re-visit tired old horror tropes. That’s fine, but if Kirkman’s ambition is to transcend the zombie story he has more work to do. The story, about police officer Rick Grimes and the small band of survivors with whom he joins (after a sudden mass zombie attack) relies on interpersonal conflict and character introspection to fuel the drama. But the plot lacks urgency and Kirkman’s attempt at complex character interaction isn’t enough to make it compelling. As it is, Rick meets his fellow survivors and they discuss whether they should stay near Atlanta or move away to the less dangerous countryside. There’s a lot of talking, much of which is repetitious. A brief trip into the city for guns provides some welcome thrills but, for the most part, the story stalls as the characters spend time getting to know one another. There is personal conflict between Rick and his former partner, Shane, but the “surprise” ending (which was nicely foreshadowed) was too abrupt. I’m sure the consequences of this ending are further explored in Volume 2 of The Walking Dead but it would have been nice to have an epilogue in Volume 1. Though I am ambivalent about this series I do see a lot of promise in The Walking Dead. I’d happily read the next couple of volumes, but I’d need to see a stronger story and more sophisticated characterization to go any further.

Richard Stark’s Parker, Book One: The Hunter – Darwyn Cooke
The eponymous protagonist of Parker: The Hunter is a pretty simple character in a pretty simple story: Parker is a hard and violent man who sets out to track down the men who double-crossed and left him for dead during a heist. But simplicity doesn’t keep Parker from being a magnificent rendering of a good, old-fashioned revenge tale. Darwyn Cooke has chosen to adapt the Parker story from a 1962 pot-boiler by Richard Stark (a pseudonym for Donald Westlake). While Parker may not be sympathetic (he tramples everyone who stands between him and revenge) you still root for him because he is brash, daring, and has the odds stacked against him.
The straightforward tale is predictable, of course, but what makes Parker worthwhile is Cooke’s beautiful art. He manages to convey effortless movement from panel-to-panel with his fluid, cinematic style. His composition is bursting with energy and motion, befitting the nature of his hard-boiled tale. Cooke’s stylized character are, essentially, idealized renderings of 1960’s stereotypes—there’s the angular, chiseled looks of Parker, the curvy allure of Parker’s girls, Lynn and Rose, and the pillowy physique of Parker’s nemesis, mob middle-man Mal Resnick. Illustrated in black, white and grey on thick, creamy paper, Parker is a high-quality hardcover and a sensual delight. 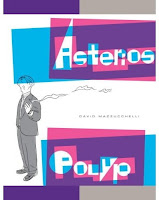 Asterios Polyp – David Mazzucchelli
The real highlight of my recent comic reading is David Mazzucchelli’s Asterios Polyp – a superb and unforgettable work of art in which Mazzucchelli displays complete command of his medium. Asterios Polyp is the name of the main character, a middle-aged architect who has lived a passive, listless life—one that is haunted (psychologically) by the presence of his dead-at-birth twin brother, Ignazio. The story begins when Asterios’ home burns down. Left with nothing but the clothes on his back (and three small, but meaningful possessions) Asterios sets out to start life anew and contemplate the various ghosts of his past. His journey of self-discovery alternates with flash-backs about Asterios’ early years and his relationship with, and eventual marriage to, an artist named Hana.
As the story of Asterios and Hana unfolds, Mazzucchelli tackles big philosophical ideas like the nature of identity and the concept of duality. Asterios’ dead brother, Ignazio (the story’s narrator), informs the heart and soul of the book. Asterios cannot move forward in his life, cannot achieve anything of substance until he resolves his “relationship” with the shadow-presence of Ignazio. Doing so is no easy task. Asterios is haunted by alternatives: What if he, and not Ignazio, had died at birth? Whose life is he really living? Can he share his life with a dead doppelganger? Mazzucchelli explores these exhilarating ideas with aplomb. In fact, there’s such a richness to Asterios Polyp, such a masterful control of the material, that I’m finding it difficult to find adequate words to describe the book.
It is clear that Mazzucchelli is at the top of his form. He has harnessed the power of comic story-telling to merge words and movement and abstract concepts in such a way that no other medium could do his unique ideas justice. And it is a book to return to: Heady with ideas, superbly structured, and so delicately layered—so perfectly executed—it demands multiple readings. Asterios Polyp is a masterpiece and one of the best books I’ve read this year.
(For more about Asterios Polyp, check out Scott McCloud’s review here. The book’s deep themes and layered concepts have inspired some to begin annotating the work. This is really the tip of the iceberg; I expect to see much more writing about Asterios Polyp in the future as there are so many puzzles still to solve. Curiously, I haven’t seen anyone talking about the riddle of Asterios’ last name (which we learn was cut in half by an “exasperated Ellis Island official” when Asterios’ father immigrated to the US). What is his true full name? I’m sure I know. The clues are there in the book. Hint: There’s lots of reference to Greek mythology in the story. Follow that lead.) [Whoops! Spoke too soon! A reviewer on Amazon discusses the full name of Asterios Polyp. More clues there.]
Posted by John at 8:45 AM