Watch Reaper (It has Ray Wise as the Devil!) 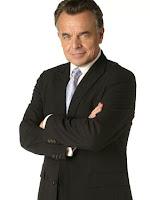 A very quick note to remind anyone who might be interested in some fun television: Reaper returns to TV tonight after almost a year (it's on the CW, check your DVR schedules). Last year, the show became an unexpected delight for me primarily because of the fine chemistry between the actors. It doesn't hurt, of course, to have Ray Wise playing the devil. It is perfect casting! (And when he makes that serious scowl . . . well, Twin Peaks fan should get a shiver.)

I never expected the series to get renewed but someone at the network liked it enough to give it another half season. I think we may get another 12 episodes or so. And then I bet it's gone for good. Still, if you're looking for a fun diversion and some genre TV that's a bit more light-hearted than most of what's on right now, look no further than Reaper.
Posted by John at 8:16 AM