Out of Shadows: Frederick Elmes on Blue Velvet

Frederick Elmes was cinematographer on three David Lynch feature films (Eraserhead, Blue Velvet, Wild at Heart) and one short film (The Cowboy and the Frenchman). In the fascinating documentary about cinematography, Visions of Light, Elmes explained: “My job [on Eraserhead] was to find ways to extract [the film from David Lynch’s mind], to have him explain how it should look in great detail.”  Together, Lynch and Elmes have produced some of the most memorable images on film:  The puzzled/awed face of Henry (Jack Nance) before a field of swirling sparkles (Eraserhead); the voyeuristic face of Jeffrey (Kyle MacLachlan) as he spies through closet louvers (Blue Velvet); the elegant, surreal appearance of Sandy (Laura Dern) on a shadowy sidewalk (Blue Velvet).  These are images which mesmerize.  These are images which demonstrate the unique artistic power of film.

Craig Miller and John Thorne interviewed Frederick Elmes on June 29, 2000. The full interview appeared in Wrapped In Plastic #48 (August, 2000).  The following is a small portion of that interview covering Elmes’ work on Blue Velvet.

Thorne:  Blue Velvet is memorable for its sharp and vibrant colors (the roses and fence, the fire truck).  It also made powerful use of shadow.  One of the film's most memorable scenes is when Sandy (Laura Dern) emerges from total darkness--and she's wearing a light-colored dress!
Elmes:  [Laughter] Yeah, that was a good trick!
JT:  Did you find scenes such as those particular challenging?
FE:  They were good.  They were great.  I certainly hadn't done that exact thing before.  David had a very specific thought in mind, that she really had to come out of the darkness, so what you see in the background is the willow tree blowing in the wind, and she just seems to appear out of it.  But again, it was something we could do in the camera and not do as a trick.  We just did it with the lighting, and make her look beautiful at the same time, because that's her first moment with Kyle [MacLachlan].  It was a very cool moment; I liked it a lot.
JT:  Was it a problem that needed experiments to solve, or did it turn out to be fairly simple to accomplish?
FE:  It was fairly simple to do once we came upon exactly what David wanted, once David could describe the mood of it.  It was pretty easy to do, and very, very effective.  That, and the music together, and the sound, really did it, really made it a beautiful moment in the film.

JT:  There's another great scene when Dean Stockwell sings into the prop light.  We understand that was not originally intended.  Is that true?
FE:  Right.  It seems to me that it came out of scouting a location when we were trying to determine who stands where, and which direction we'd be looking in the room.  And somebody in the art department picked up this light as a prop microphone and said, "Okay, does he stand over here?  Does he stand over there?"  And I think that's kind of what it came from.  David decided it was a great idea, and we would use that.  It turned out to be perfect.  Stockwell picks up the light and sways back and forth to sing the song, and in fact what you see is a little trick, actually, because his shadow on the wall behind him is not his real shadow.  It's an electrician back there with a little paper cut-out making the shadows rock back and forth on the wall.  We couldn't do it for real, so we did it with pretend shadows.  It worked well.

JT:  On a major film, are you often improvising the look and lighting on set, or are things usually planed out?
FE:  Certainly there's a mood and a tone to a film, which is set in the beginning, and which you want to be consistent to.  It is, in a sense, like making a painting--you have different parts of the painting, and different parts require slightly different techniques or different feelings, but it's still one painting.  And so you go into a film with one vision of how it will be, and in a sense every scene is an improvisation on that theme.  So every scene requires a little different handling, even if you're coming back to the same room again and again, like Dorothy's apartment [in Blue Velvet].  It transforms; it changes character a little bit.  Depending on whether it's daytime or nighttime, depending on what action is happening, the mood in the room changes.  We set up what we wanted it to feel like, but then you make little changes and adjustments as you go to make it appropriate for the scene.  So for me, the lighting, the feeling of it is driven by the actors and the motivations in the scene.
JT:  We actually had a question about that further down on our list, which was basically, how does character and plot influence the look of a film?  In particular, do Lynch and other directors discuss the character motivations with you, or is it something you intuit?
FE:  That's a funny question, because each director is really different.  David doesn't often tell a lot of things about the characters.  Others will tell more, but usually they're pretty tight about it.  That's something that they discuss with the actors, and I think it's my job to eke out some of that information, intuit what they're thinking and get them to talk about it a little bit, because it helps me to know what's going on with the characters.  It really helps me to be clear about what the motivations are in a big sense--where they fit in the story, and all that.  That's very important stuff, because I think it has everything to do with the visual style.  So yeah, it's important to me, and I love to spend time with the director talking about that stuff and asking lots of questions.
JT:  In the Visions of Light documentary you mention that you and Lynch had years to talk about the look of Blue Velvet.  What kind of things did you talk about?
FE:  For David and me the advantage was that we had already spent a few years together on Eraserhead, so some stuff started to come automatically and not have to talk about [them].  But the advantage with Blue Velvet was that there was a long genesis period.  We knew the film was going to get made, we just didn't know when.  The schedule changed, and things got pushed back, and we had time to talk.  David had been back there to Wilmington, North Carolina, and had driven around and seen a lot of the local towns and had found one that we wanted to model our town on, so we chose the parts of Wilmington that looked appropriate.

Dorothy's apartment was a certain style and feeling, and it was a different neighborhood from where Jeffrey lived, where Kyle's character lived.  His was a very little street, and we knew there were lots of scenes that took place walking up and down that street, so it had to have a certain character, a certain feeling to it.  Those were really important things that we could talk about in advance.
JT:  A case can be made that the look of Blue Velvet (the town, the community, etc.) influenced Twin Peaks.  Did Lynch ever discuss any aspect of Twin Peaks with you?
FE:  No.  I wasn't really part of that at all, as much as I like it.  Certainly there are similarities in the small towns, and I know that's right up David's alley.

Miller:  You worked on Tim Hunter's film, River's Edge, which was released about the same time as Blue Velvet.  Which did you work on first?
FE:  Blue Velvet was first, and then River's Edge.  It was great to work with Dennis Hopper [in both films].
CM:  Both times he had crazy roles.
FE:  Yeah, both times crazy guys.  It was really a joy to work with him.  It's funny, a story on River's Edge.  There were a lot of young actors, and Tim Hunter's very good at casting young actors, taking advantage of people who had talent who hadn't been seen much--Keanu Reeves, and Crispin Glover, and Ione Skye--there's that handful who have gone on to keep making movies.  He put them together for the first time, and so we were doing a read-through a week before we started production.  All the actors showed up, and they're all sitting around the big table, and everybody's waiting for Dennis Hopper to show up.  This is their hero.  To be in a film with Dennis Hopper is like being in a film with James Dean, and they were all talking in hushed tones about him, and sure enough Dennis shows up wearing a three-piece suit, carrying a briefcase.  It was so completely opposed to their image of him, their jaws just dropped.  They couldn't quite make sense of what Dennis was up to.  But Dennis was an extremely professional and very responsible actor on both films.  He was a joy to work with. 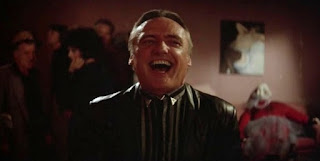