Review: The Best Science Fiction and Fantasy of the Year Vol. 3 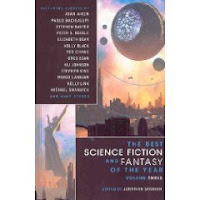 I've got to say that I'm pretty pleased with Jonathan Strahan's Best Science Fiction and Fantasy of the Year Volume 3. At least two-thirds of the book contains excellent short fiction. And the rest of the stories are very good, too. In fact, there are really only one or two entries that might qualify as clunkers. That's an amazing percentage, one you don't often see in "Best of the Year" anthologies.

I usually pick up Gardner Dozois' hefty Year's Best Science Fiction and dutifully make my way through it. In the end I'm amazed at how many stories strike me as mediocre. I always think, "If Dozois eliminated half the stories in the collection he'd really have the 'best of the year.'" Sure, the book would be smaller, but it would also be stronger. As it is, the mediocre (and downright bad) stories detract from the good ones.

Strahan gets it, though. And he's hit upon a great formula. Combine the year's best Science Fiction stories with the best Fantasy stories. Put it all under one cover you get a doubly strong book.

I think fans of good writing appreciate the rewards of both Fantasy and Science Fiction, especially as the line between the genres has been blurring of late. The effects of both SF and Fantasy are the same: a sense of wonder, the thrill of fully-realized worlds, the insightful perspectives on our own, everyday life. It really doesn't matter if a story fits some rigid genre definition as long as it's told well and has fully realized characters.

So Strahan's latest anthology is a good--no, a great--one. I won't review every single story here (I'm satisfied with commenting on the book as a whole). But I will point out a few stories that I think are particularly good: The best story in the book is "Exhalation" by Ted Chiang, a story of impending environmental doom in a closed universe. It is wonderfully written, from its science-fictional "problem-solving" approach, to its moving contemplation on the meaning of life. Bravo! Other outstanding stories include: “The Dust Assassin” by Ian McDonald, “The Gambler” by Paulo Bacigalupi, “Machine Maid” by Margo Lanagan, and “26 Monkeys, Also the Abyss" by Kij Johnson. But there are so many other good stories here, including contributions by Robert Reed, Ted Kosmatka, Peter S. Beagle, Garth Nix, Michael Swanwick, John Kessel, and Kelly Link. (And, really, I could go on and list just about every author included but I'll stop here and let you to look at the table of contents for yourself.) This is very strong book.

Whether your taste tends toward one genre or the other you will find plenty to satisfy in The Best Science Fiction and Fantasy of the Year Volume 3. And if you're a genre purist and only want to read SF or Fantasy (but not both), well, I still doubt you'll find a better collection anywhere else. Plus, who knows? You might discover good stories aren't limited to only one genre. Go ahead! Get the book and then select something different from the menu! You'll thank me later.
Posted by John at 2:04 PM