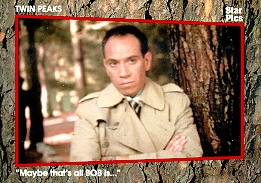 Few characters from the vast Twin Peaks ensemble are as memorable as Albert Rosenfield, the acid-tonged FBI pathologist who aided Agent Cooper is in his quest to find Laura Palmer’s murderer.  The charm of Albert was largely due to the talented actor who portrayed him—Miguel Ferrer. Although Ferrer credited Albert’s appeal to the writing of his character, Albert Rosenfield resonates, years after Twin Peaks ended, because of Ferrer’s unique talents. Ferrer acknowledged, “There’s something in my sensibilities—the way that I approach a character—[that] I’m able to make a pretty despicable guy likable on some level.”

On January 19, 2017 Miguel Ferrer passed away from throat cancer. This was terribly sad news, especially as Twin Peaks fans everywhere were excited by Ferrer’s imminent return to the new Twin Peaks series for Showtime. We are grateful—and lucky—that he had the opportunity to reprise his most indelible character, and that he was able to work again with David Lynch, a director he greatly admired.  Ferrer will be sorely missed.

Although Twin Peaks fans remember Ferrer for his portrayal of Albert, the actor had a prolific career in Hollywood both before and after Twin Peaks. In addition to acting, he was also a drummer (playing in a number of bands) and a comic-book writer. Ferrer came from a performing family; his father was the renowned actor Jose Ferrer, and his mother the popular singer Rosemary Clooney. Ferrer was deeply connected to the creative scene in Hollywood. He had friends everywhere and was respected and well-liked by his fellow performers.

In February of 1998, Craig Miller and I interviewed Ferrer for Wrapped In Plastic. At the time, Ferrer was involved in two high-profile projects for television: the sitcom Lateline, and the miniseries Brave New World. We were eager to learn more about Ferrer’s latest projects, and also ask him about his past work. We found the actor to be enthusiastic about both his craft and his association with David Lynch and Twin Peaks. Ferrer was a joy to interview; he recounted a number of stories about his career that were both funny and refreshingly candid. 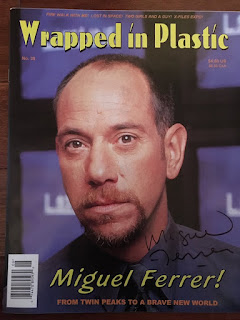 Below are a few fascinating excerpts from that interview:

Meeting Al Franken and working on the short-lived sitcom, Lateline:
I met with Al Franken and John Markus and we got along very well. I asked them, “Why do you guys think I can do comedy, when the rest of the world tells me I can’t?” I remember meeting Al at a party for Saturday Night Live when my cousin George [Clooney] hosted for the first time. I went back to New York with him just to cheer him on. At the after-party I met Franken and we talked for about five minutes and he said, “I’ve always thought you were really funny.” I thought he was really drunk! But he thought I was funny! Then it was his job to convince Paramount, and then all of their jobs to convince NBC. Nobody there thought I could make anybody smile. They thought I could just hold guns to people’s heads and rape nuns and things. So that’s how it worked out. 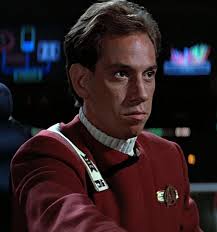 [Brave New World] was really interesting. It was fairly well-written, a pretty true adaptation of Aldous Huxley novel, which was one of my favorites in high school. Although it was very much updated, with genetic engineering and stuff like that. I was very intrigued by the cast. Peter Gallagher I’ve always admired, and Leonard Nimoy I’ve worshiped since the first episode of Star Trek. I hadn’t seen him since he hired me to work on Star Trek III, in one little scene. Remember the Excelsior, the other ship? Jim Sikking was the other captain, and I was the only other guy who talked on the bridge! [Laughter] I was his first officer. It was just incredibly cool.

First Exposure to David Lynch:
I saw Eraserhead way back when, and I thought, “This guy is nuts.” I really didn’t get it the first time I saw it. Then, of course, there was the great movie, The Elephant Man. I remember I read a wonderful article Rolling Stone did on Lynch when The Elephant Man came out. I was fascinated by that interview and really wanted to meet him from then on.

Friendship with Carrie Fisher and rehearsing Star Wars:
Carrie and I have been friends since I was fifteen and she was fourteen. We went to high school together. What happened was, we were out at some party or something, or we went to dinner. I was bringing her home and she said, “Oh, look! Here’s this script. I’m auditioning for this movie and I’m really excited about this. C’mon inside.” We went inside and she took out the script. She said, “Let’s take a look at this. It’s called Star Wars and it’s going to be this wild, crazy science-fiction movie by the guy who did American Graffiti.” I said, “You’re kidding!” She said, “No, you want to take a look at it? It’s supposed to be pretty cool.” So we sat there and read the script to the first Star Wars aloud to each other. We were doing all the different parts. This was way before I even thought of being an actor. It was great! She auditioned for the role a couple of weeks later, and got it.

Strangely enough, when they were shooting that in London, I was in London playing drums for Bing Crosby at the London Palladium. Carrie would come to the shows sometimes at night. And I had nothing to do during the day so I would ride out to the studio, out in the country outside of London, and hang out with them all day. I knew Mark [Hamill] a little bit. So we hung out a lot that summer. Then, a few years later, Bing played the Palladium again and they were back to do Star Wars 2. So those two summers Mark and Carrie and I hung out a lot. 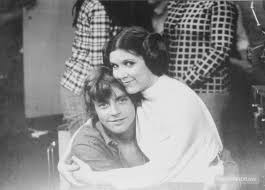 I remember asking those guys [the first time], “So, is this going to be a good movie?” They would say, “I don’t know, we’re standing in front the blue-screen saying, ‘Oh look at that! They’re coming in from the right!” Nobody knew if it was going to be good. But I guess that picture kind of worked out. [Laughter] 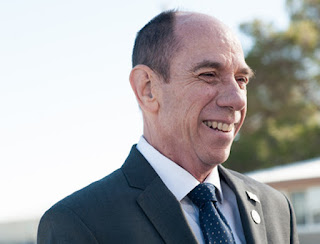 There’s much more to the interview, which appears in WIP 35.  It’s worth seeking out.

(Most of Miguel Ferrer’s comments about Twin Peaks also appear in my book, The Essential Wrapped In Plastic.)