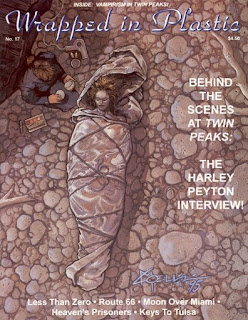 Wrapped In Plastic #17 stands out to me as a particularly fine issue for a number of reasons:  First, it contained a wonderful essay by Rhonda Wilcox about vampirism in Twin Peaks. Second, it included a lengthy letter from Tim Lucas of Video Watchdog fame.  Third, it featured a long interview with Harley Peyton about Twin Peaks and other Peyton projects.

This Harley Peyton interview “co-stars” Eric Stoltz and James Spader, both of whom were present when we interviewed Peyton. (All three gentlemen were on location in Fort Worth making a film, and Craig Miller and I were lucky enough to visit the set.) Spader and Stoltz contributed a few crazy interjections as we attempted to stay focused on our interview.  Here’s one exchange:

Peyton: All the actors [on Twin Peaks] were great; we had no problems with them.  The running of it was pretty simple.
Stoltz:  Well, then, how come Kyle refused to cooperate?
Peyton: A very good question.
Thorne: We had heard that he didn't feel his character should be involved with someone who was supposedly under-age.
Peyton: Oh, Kyle! I don't know! You'd have to ask him. As I said, everyone was great.  Michael Ontkean was tremendous.  He's actually in the James Spader mold--he just wanted to stay at home. No, I shouldn't say that.  I'm kidding! [laughter]
Spader:  Just leave me out of it!
Stoltz:  [To Spader] Don't talk to Harley!
Peyton: All these guys were great because they loved it.  It really was a fun job.  You'd go to this place every day and you'd do the work and everyone got along pretty well.  So that part of it was wonderful.

I recommend tracking down WIP 17 for the full interview.  It’s something else.

What also excited me about WIP 17 was the cover.

Because we were printing our first in-depth interview with one of the producers of Twin Peaks, we wanted to convey a “behind-the-scenes” concept for the cover. We did not have any good photographs to use, so we decided to go with an illustration.  Craig Miller had been in touch with Chris Moeller, an accomplished artist who, at that time, was working on the Shadows Empire comic book for Dark Horse Comics. Craig commissioned Chris to do the cover for WIP 17 with a “behind-the-scenes” theme.

Chris produced a beautiful acrylic painting that depicts a possible scenario from the making of the Twin Peaks pilot: a make-up artist tends to Sheryl Lee as she waits, wrapped in plastic, for the shoot to begin. 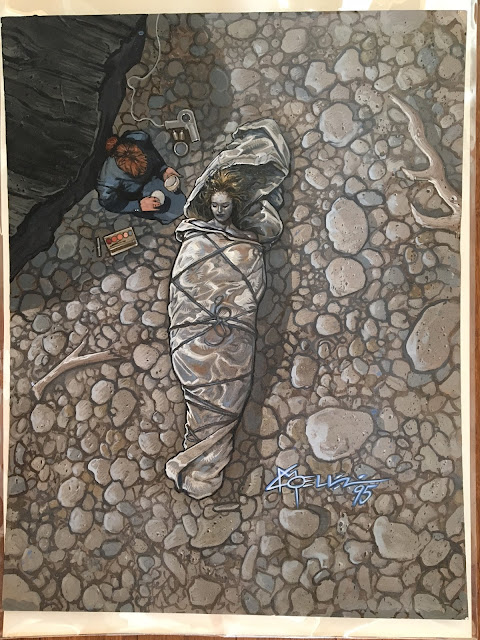 I love the detail in the painting.

The make-up artist, with her cosmetics and blow-dryer, kneels carefully in the shadow of the giant log where Laura has washed ashore; 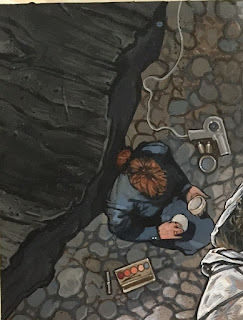 the plastic that wraps Lee has a hint of translucence revealing some skin tone underneath, 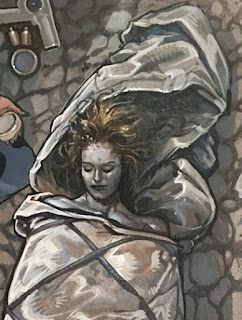 the smooth stones and driftwood are an embellishment, yet these elements delicately balance the composition. 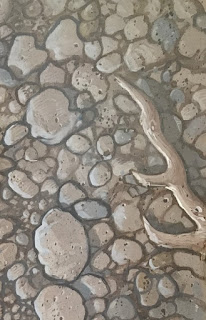 It’s a beautiful work of art!

For some reason, the painting took on a brown tone when the cover was printed.  I’m not sure why, as the original was bluer and definitely had a “cooler” look to it.

For years, Craig had Chris Moeller’s original painting prominently displayed in his office.  After Craig passed away, Howard Miller (Craig’s father) generously offered the painting to me. I was thrilled and honored to get it; the original cover to issue 17 is one of the great treasures from my years working on Wrapped In Plastic.