Best TV of the Decade

It's that time again.  Time for lists and more lists.  Best books.  Best movies.  Best comics.  Everyone's got a list.  I used to rant against lists.  (It seems that Entertainment Weekly's got a "best of something" issue every few months.)  But blogs are a great place for lists.  Plus it is December and the last year of the so-called "aughts" . . . . So, in the best spirit of "if-you-can't-beat-'em-join-'em," here's my first list for the month:

Best TV of the Decade:
(Note: This is not a top-ten list.  Why limit--or force--myself to ten entries?)

1) The Wire.  Hands-down, the best show of the decade. (Any list that doesn't have The Wire in the top two or three slots is worthless.  (So there, Hollywood Reporter!))  The Wire is the most accomplished and satisfying show I've ever seen.  Yes, I love Twin Peaks (which I still consider the most daring, innovative and mesmerizing show of all time) and although The Wire never challenged me like Twin Peaks--wow!--did it ever engross me!  Over five seasons, The Wire told a Dickensian story of drug-dealers, junkies, cops and politicians in Baltimore, Maryland.  It managed all at once to be tragic and hilarious, thrilling and thought-provoking.  The acting, directing and writing were pitch-perfect.  And the characters!  Oh man, the characters.  Who can forget Omar and Bunk and McNulty and Stringer Bell and Bubbles and Freamon and Ziggy, etc. etc?  No character was a stereotype.  There were no heroes or villains, just realistic people trying to survive in a desperate environment.  The Wire, with its intricate, finely-tuned plots remains the best example yet of what can be accomplished in the medium of television.

2) The Office (British version).  The first series to skewer the "genre" of reality TV and lampoon the kind of people who seek an easy road to "fame;" the 12 episodes (and two-hour finale) of The Office told a complete and satisfying story of what happens when ordinary people are put on extraordinary display.  The star of the show (and "the show") was the smarmy, self-centered, fame-seeking, David Brent, played to heartbreaking and hilarious perfection by Ricky Gervais.  Brent thought he deserved to be on TV, thought fame would solve all his problems. But his bid for fame turned out to be sad and delusional (not unlike what has happened with many recent reality "stars" and wanna-be's).  Like The Wire, The Office took full advantage of television's strengths, not so much with extended narrative (as in The Wire) but with the medium of television, itself.  The "idea" of the documentary--the presence of the cameras in the workplace--was as much a part of the story as the characters.  The Office was innovative and refreshing, and it paved the way for so much of what is on TV today.

3) The Sopranos.  There is much to like in The Sopranos, but what really strikes me is how series creator, David Chase, developed such complex and flawed characters.  The stories on The Sopranos delivered thrills and intrigue, certainly, but it was the characters who, for me, provided lasting entertainment.  Chase found ways of making their psychological states--their internal conflicts, rationalizations, and avoidance--the stuff of high drama.  He was also lucky (and savvy) to cast James Gandolfini as Tony Soprano.  Together, Chase and Gandolfini shaped the most fully-realized TV character of all time.  To be sure, there were other brilliant performances and memorable characters on The Sopranos, but Tony will always stand out among them.  (Oh, and let's not forget that brilliant series ending.  It goes on and on and on           )

4) Mad Men.  Intricate plotting (like The Wire) coupled with complex characters (like The Sopranos) easily makes Mad Men one of the best shows of the decade.  And the series may have many more seasons to go; I don't doubt Mad Men will appear on many "Best TV " lists for the next decade.  Mad Men has brilliantly explored the idea of different "identities" found in every person (the work persona, the home-life persona, the persona you only reveal to yourself).  These identities compete for control in the show's main character, Don Draper (aka Dick Whitman) but are also evident in the show's other wonderful characters, particularly Peggy Olson and Pete Campbell.  Mad Men is also about the sharp cultural shifts happening in the United States in the early sixties and while sometimes the show is too obvious in the way it highlights the differences between "now" and "then," it does provide a valuable look at unique moment in time: that still-point between the conformist, propagandized Fifties, and the radical, authority-defying Sixties.  With season three, that still point has passed.  The series has clearly reached a turning point and all signs indicate that it will redefine itself.  What will Mad Men of 1964 look like?  I can't wait to see. 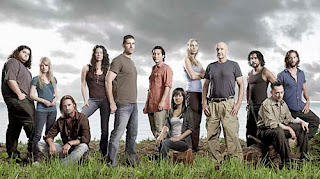 5) LOST.  Finally, network TV gets it right!  A long, complicated, mind-bending mystery!  From the beginning, LOST was about questions ("Guys, where are we?").  Could a show with such a strange premise and huge cast possibly keep its secrets and keep viewers satisfied?  The X-Files tried and failed.  So did Alias and Heroes.  Somehow, though, LOST managed that most difficult of balancing acts: it simultaneously delivered satisfying answers while withholding complete narrative closure.  Over LOST's five seasons, layers of mystery have been stripped away to reveal glimpses of a grander structure.  There is a sense that the characters (and the audience) are getting closer to the truth.  In fact, the greatest pleasure of LOST is piecing together clues from episode-to-episode and sensing the bigger picture come into view. Still, we have yet to see the whole picture and there is a chance that everything could fall apart.  There's a lot at stake in the upcoming final season of LOST.  Big revelations are due, but can they possibly meet viewer expectations?  I think the creators of LOST know what they're doing (a rarity for ongoing network serials) so I'm expecting surprising and satisfying answers.  I've got my fingers crossed, anyway.

OK, that's five shows.  There are many other great series from the past ten years and I'd like to discuss them all, but time and other obligations prevent me.  Still, I'd be remiss if I didn't at least mention these other noteworthy series from the 2000's.  They are:

The West Wing, Deadwood, Big Love, the first two seasons of Battlestar Galactica (the last few seasons of Galactica make it one of the worst shows of the decade so let's just pretend they never happened!), Buffy the Vampire Slayer, Veronica Mars, and The Office (US version).

Of course, there are many series I've failed to see.  Shows like Arrested Development, The Shield and House have consistently garnered great reviews.  Their absence here says nothing about their quality.

Bonus!  Best Single Episodes of the Decade (in no particular order):

That's it for now.  More lists to come!