Wrapped In Plastic at 25: In the News

This is the last of my 25th anniversary posts. It is also my most self-indulgent. Forgive me.
As Twin Peaks faded into history, Wrapped In Plastic was often acknowledged as being a stalwart reminder of the lasting impact of the series. Over the years, a number of media outlets either reviewed Wrapped In Plastic or interviewed Craig Miller and myself about how (and why) we were still making a magazine about a show that had been cancelled after a mere 30 episodes. Wrapped In Plastic was a curiosity and it became a good human-interest topic.

It was always a thrill to get mentioned in another magazine or on a radio show. The first real interest in WIP was local; Craig and I appeared on a Dallas public access TV show. It was the kind of program that aired at 2:00 AM on the B-cable (remember that?). Despite its very limited reach I was amazed when I walked into the grocery store a few days after it aired and an employee said, “Hey! I saw you on TV!”

WIP started to get attention in small-press magazines and fanzines. Before the internet a plethora of publications reviewed all manner of obscure media. Factsheet Five was the most famous of these and it was an honor to be included in their fanzine review. We were also reviewed in dozens of other small press mags, and, honestly, the reviews were usually pretty good.

But not always. Here's one that says "the editors' love for Twin Peaks fails to shine through." (We were also "fawning" in our interviews and "haughty"!) Believe it or not, this reviewer wanted us to publish WIP less frequently!

The mainstream media got interested WIP and our biggest vault into public awareness came when the Dallas Morning News did a long piece. That article was picked up by one of the wire services and was reprinted in dozens of major newspapers all over the country: 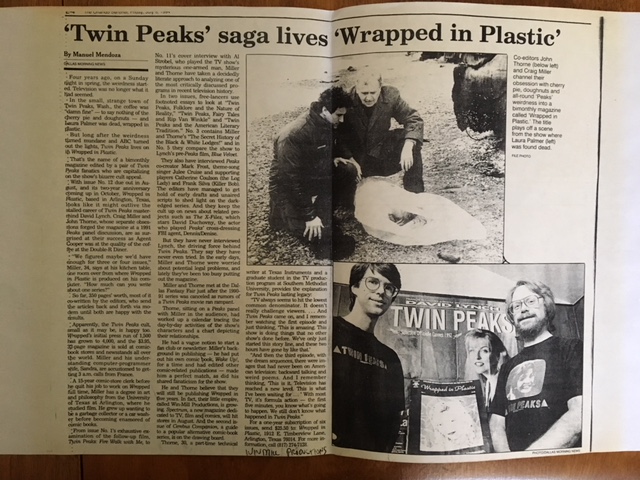 Shortly after the DMN piece, Entertainment Weekly gave us a call. To our amazement, they selected Wrapped In Plastic as one of their “Cool” things for the Summer of 1994! It was a huge honor to share a page with the brilliant Patrick O’Brian. (And Neil Gaiman’s Sandman was on the opposite page!)

A few years passed and, at last, plans were being made to release Twin Peaks on DVD. Artisan, the company behind the discs, asked us to help put the release together. 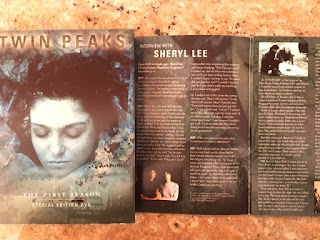 We contributed liner notes, an excerpt of our Sheryl Lee interview (from WIP 16), and a new interview conducted with Mark Frost. We interviewed Frost by phone for almost an hour but they only used 10 minutes of footage. Oh well, it could have been worse. (Oh. That’s right. It was.)

One of the biggest articles about Wrapped In Plastic appeared in a 1999 issue of Texas Monthly. Pamela Colloff spent many hours talking to Craig and me on the phone and in-person. It was a really great article and a high-point for coverage of WIP. 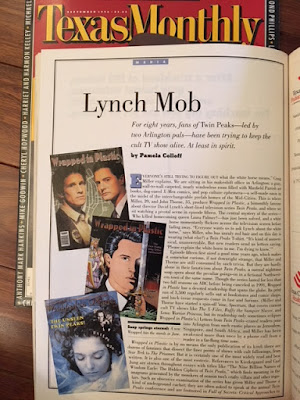 A few years later, Wrapped In Plastic finally ceased publication.  Video Watchdog wrote a very nice obituary and that was the end of interest in the magazine.

Or so I thought.

After the October 2014 announcement that Twin Peaks was returning to television, I started to get calls about Wrapped In Plastic again. Jeff Jensen at Entertainment Weekly spoke with me for some time and wrote a long piece about the history of the magazine. 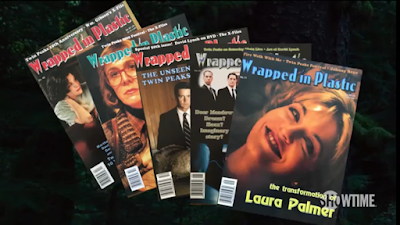 So that's it. Wrapped In Plastic has a (very) small place in the history of Twin Peaks. Twenty-five years later a few still remember what Craig Miller and I did over 75 issues. I feel very good about what we accomplished. We didn't do it for money (ha!) or notoriety. We did it because we loved Twin Peaks.

Thanks for allowing me some time to reminisce. It was fun.